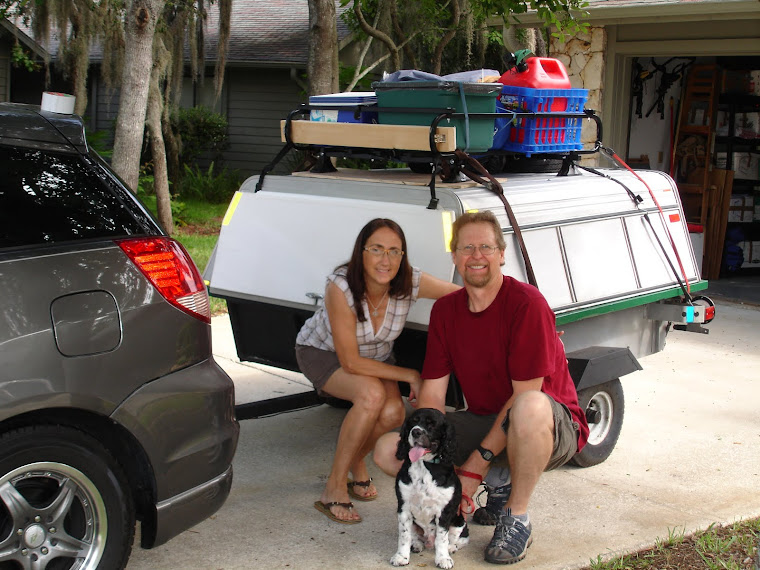 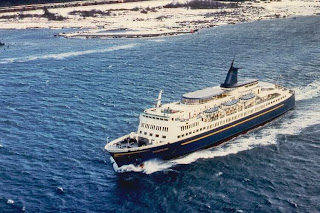 Although the MV Wickersham was only part of the Alaska Marine Highway System up through the mid-70s, it made a grand impact, and many locals still fondly recall its stately figure cruising the Inside Passage under the steady hand of Captain Ken Florian.


Unlike the original three mainline state ferries (that were specifically built for the inside waters between Prince Rupert and Skagway), the Wickersham was originally built to ply the open ocean and the rugged waters of the European North Sea. The feel of the ferry's movement through rougher seas would instantly smooth out moments after the stabilizers were kicked in.


The Swedish-built Wickersham was designed with stylish passenger amenities that wouldn't be seen in this area until the larger cruise ships started arriving in the 1980s. 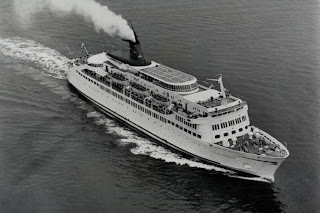 With its prominent narrow bow, large space-age solarium and dramatically swept back smoke stack, the 365-foot long Wickersham always looked like it was charging ahead at full speed, even when it was tied to the dock. Alaskans who appreciated style in nautical design reportedly loved seeing this ferry approach on one of her many "beauty passes." 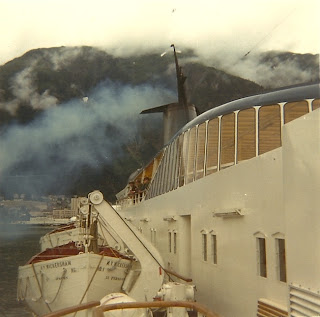 My favorite personal photo of the ship leaving (Juneau, I believe) in early August, 1971.

It would take several years and several million dollars to build a new open-water designed ferry, but the expansion of service was needed immediately. Alaska had began looking around and soon located brand new passenger and vehicle ferry available in Europe, the Stena Britannica. She became the Wickersham.


But buying foreign had its price, Cohen wrote.
The purchase cost was just under $7 million dollars and some state newspapers drew an unflattering comparison to the 1867 Alaska Purchase price of $7.2 million. But state officials countered that construction estimates for a new oceangoing ferry were more than $10 million with a four year design and construction timeline. 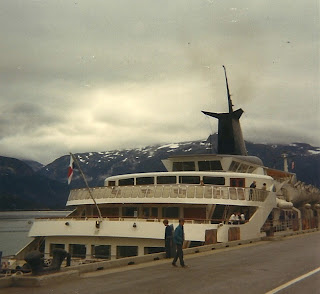 The ship would only operate between Seattle and Alaska ports if it stopped in Prince Rupert on the way. It also had a complicated bow loading system needing specific expertise to operate for its Alaska service to Ketchikan, Juneau, Sitka and Haines. 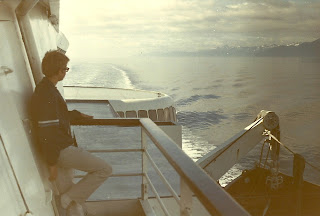 Here I am at 15, transfixed by the low hypnotic vibration of the big diesel engines pushing us past the mountain ranges.... 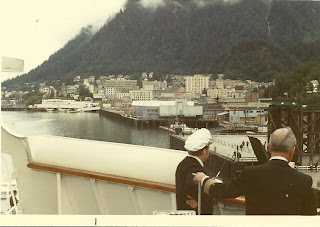 The Wickersham also had a deep rough seas draft, but that made it impossible to traverse shallow areas like the Peril Strait near Sitka. As a result, it had to approach Sitka from the open ocean on the outside of Baranof Island. Fortunately due its deep cut, it was an extremely capable deep sea traveling ferry, offering no worries about crossing any of the rougher winter waters. 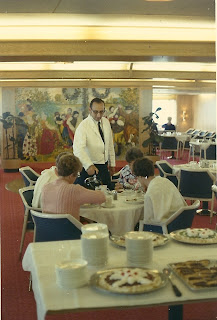 Photo I took of the dining area... dessert anyone?

The Wickersham was also popular with passengers because - although it did not have luxury accommodations - its staterooms and common areas were much "spiffier" than those of the more utilitarian Alaska ferries. 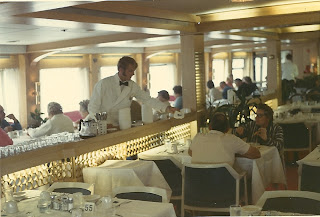 I could like the job of this server, I'm sure I was thinking at the time....

State officials also boosted interest in the new ferry by offering special cruises such as one around Revillagigedo Island as well as the first state ferry visit up Portland Canal to the communities of Hyder, Alaska and Stewart, B.C. 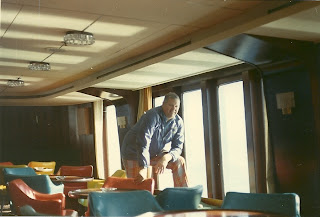 There's Dad, (after his unpaved Alcan driving was completed), happily letting another captain take over. (Our blue wagon & tent trailer were riding below us, just above sea level.) Vehicle charges were "by length" so our car plus trailer cargo charges exceeded that of the pricier 24-foot RV of the day. 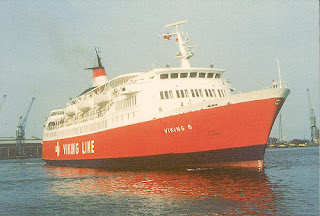 When the new replacement "Columbia" went into service in 1974, Alaska's M.V. Wickersham was sold to Findland-based Rederi Ab Sally, and used on Viking Line's traffic between Helsinki and Stockholm as the Viking 6, through 1980, with it's blazing newly painted red hull. From 1980-82, she was chartered to Brittany Ferries as the Goelo, serving on the Ramsgate to Dunkerque Run, until sold to the Cypriot-based Sol Line as the Sol Olympia, where she ran between Venice and Haifa. 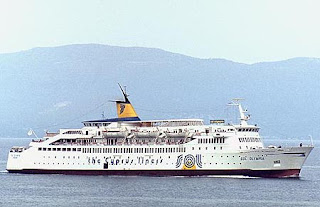 In 1985-86 she was chartered to Sally Line, (UK subsidiary of Rederi Ab Sally and reverted again to the Viking 6. Sol Lines was bankrupt by 1986.

Her bright white hull was punctuated with a giant happy whale in the next phase of her storied service life. She had been acquired by Moby Lines and renamed Dream. She served that line mostly around Italy and Sardenia right up through 1994, when she was transferred to the subsidiary Sardegna Lines. She kept the blue whale but now carried the name Sardegna Bella. 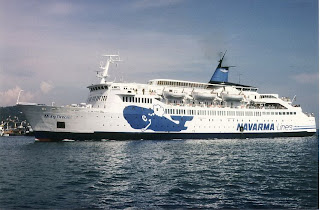 In 2001, the 34-year old ship that Alaskans remember as the MV Wickersham was unceremoniously sold and scrapped in Turkey. She retained that happy, if fading whale image on the side of her hull, right up until the bitter end. 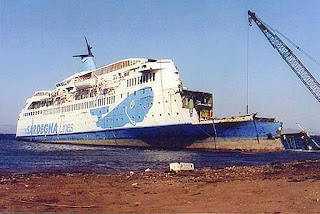 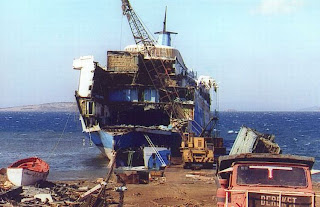 But this isn't the way I want to remember the sleek ferry that impressed me in Alaska in my youth, the Stena Brittanica turned M.V. Wickersham.
I will let the final two archive pictures I took (below) as a 15-year-old kid signify her Alaska Glory Days. True-blooded Alaskan aficionados of the streamlined ferry claim that the Wicky's soul navigated right back to Alaska, where the ship had offered decent dining, a deep, stable hull that would carry vehicles and cargo through any rough seas, all the while offering up those golden-tinted translucent upper deck panels sheltering those riding above.

Passengers beneath that warm canopy glow, who were lucky enough to find passage on her, were offered up views of remote shorelines, rugged mountain ranges and glaciers.... jewels of BC and Alaskan beauty. 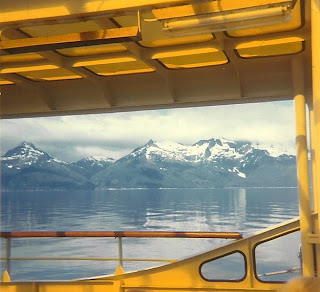 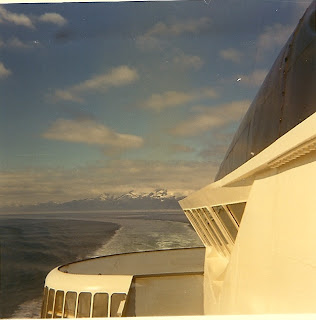 Posted by Snowblind at 11:43 AM No comments: